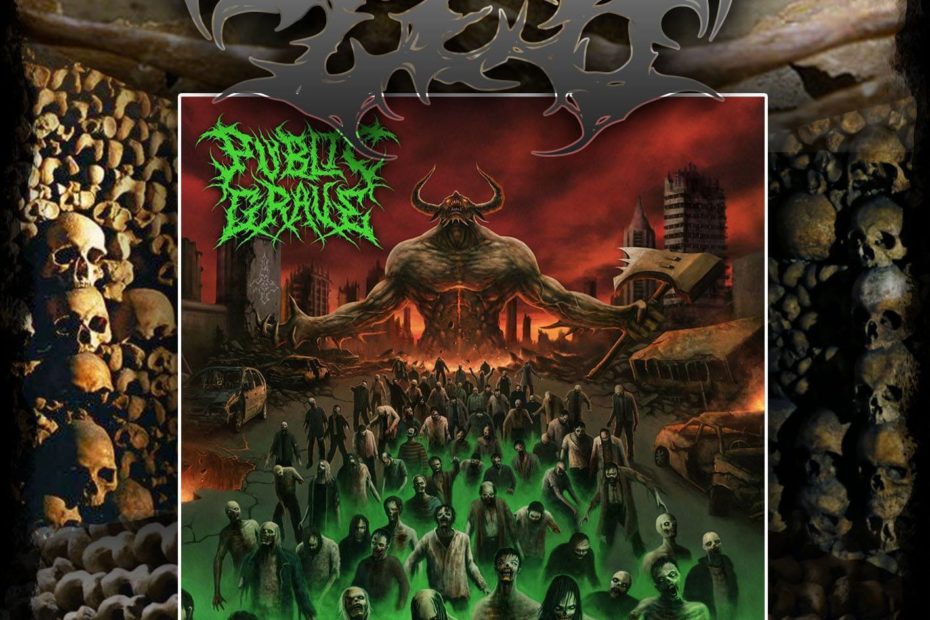 Near Munich in the smaller, bavarian town called Fürstenfeldbruck was a child born in 2008. It was named Public Grave and sounds like if Benightedand Aborted had a love child. The chromosomes of Benighted are much stronger in this one depending on the sound but from the child’s education it is smart enough to walk it’s own way and throw his ideas in the genetic cocktail. As the band already started walking back in 2008, this is the first full length output or anything else I heared about them to be honest and I was positivly surprised by it! As far as I read in the band’s story they were active doing live gigs and being around the last years. So sorry for not getting to know you as I am very active.
Released on Rebirth the Metal Productions I just received the copy from my friend Andreas. I heared it before I received the physical copy on spotify and already shared it on my site because I was really enjoying this album while listening. Everything was recorded at Grotesque Studios and Demigod Recordings.
First time I saw the cover I thought it is some standard Slam stuff comming but I did not imagine this heavy and fresh jackhammer punching out of my speakers. Nice grooves, guitar rhythms, high tones, variating and blasting drums, growling deep and screaming vocal mixture. I took that lovechild theme to describe their sound for me because this was the first comparison in my mind. But parents couldn’t be more proud to see their loved one to make it’s own steps and develop it’s own sound and this is what these guys are doing. On this album they own the sound and come in with a “BOOM”. (When you heared the album you will understand. Check Song “Cranium Crush Fest” in the beginning.)
The 11 Tracks in this blasterpiece (First one is an intro) will satisfy every fan of a little modern Death Metal music, with a lot of oldschool tradition elements and brutality brought to the new era. It is not as polished as the so named parents but a more rough and raw version with own rage inside and hunger for more. I am really looking forward to new material from this band and see them live in the future.
9 / 10 for me. Let’s see where the fury road will lead them. All the best to you guys.
Cheers Zed 🍻🔨
https://www.facebook.com/publicgrave/
https://goo.gl/CzUkCt
https://rebirththemetalproductions.bandcamp.com/