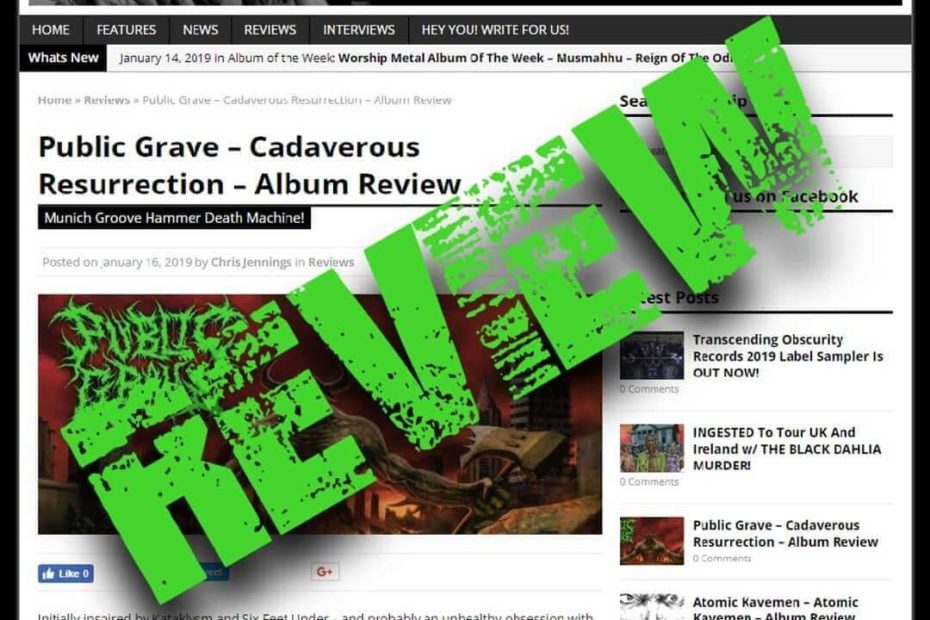 We got an other review! Thanks to @worshipmetalUK! 🤘 🤘
Check it out!👉http://www.worshipmetal.com/reviews/public-grave-cadaverous-resurrection-album-review/

Initially inspired by Kataklysm and Six Feet Under – and probably an unhealthy obsession with all kinds of guts, gore and mayhem – Germany’s Public Grave have been plying their trade since 2008 and finally have a debut album with which to spread their disease.
Resolutely indebted to old-school death metal masters they may be, but there’s a modernised – dare we say it, occasional deathcore – sheen to Cadaverous Resurrection which plants it firmly in 2019. It’s still an album about muthafuckin’ Zombies though, so don’t fret, pet! However, in this context, the Zombies would appear to be us, the consumers, the mindless drones of modern society, and Public Grave aren’t too happy with the situation.
Public Grave bassist Korny comments: “Cadaverous Resurrection is a concept album about the current state of our society. The social sickness makes us mad and we want to get rid of apple-polishers acting without thinking.”
Fruit-polishing aside, you can’t argue with the sentiment and you can’t really argue with the music either! This is solid death metal, with oodles of groove and plenty of bite. We’re not in prog territory here nor are we in full on Swedish mode, insteadPublic Grave have settled into a moderately mid-paced, occasionally brutal mix of catchy-as-Ebola riffs and heads-down thrashing.
There’s nuthin’ new here to scream and gargle about but there’s also nuthin’ to complain about either. Good death metal from a proficient band. 7/10
Public Grave – Cadaverous Resurrection
Release date: 07-01-2019
Genre: Death Metal
Label: RTM Productions